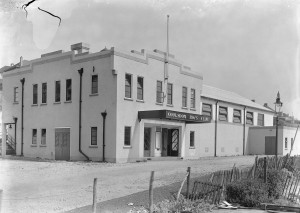 Photograph taken by the Bunce family of Caterham. Reproduced by permission of the Surrey History Centre.

Due to a recent programme of significant investment in the Centre, with a new roof and a new heating system, this ‘grand old lady’ of Coulsdon is pretty spry, physically. But there is a problem. Her memory isn’t what it ought to be. Like a number of people who reach a significant age, things that ought to be remembered easily have slipped down the back of the mental sofa, and can’t be found despite much digging. However, here are one or two things that we’ve discovered.

The Centre was opened in a great flurry of celebration as the Coulsdon Boy’s Club on Monday, 25 November 1935. Prince Arthur of Connaught, a grandson of Queen Victoria, undertook the opening ceremony as part of that year’s Silver Jubilee celebrations for King George V. He was accompanied by the Bishop of Southwark and a number of other dignitaries, both local and national. The cost of the centre was estimated at £7,759. And all this was reported in following day’s edition of The Times, so it really was a newsworthy item for the day.

Leap eleven years, to 1946. On the evening of 15 October, war-hero Field Marshal Montgomery came to Coulsdon and gave a talk to the boys of the Boy’s Club on the subject of the ‘Man and the Atomic Bomb’. It was a subject at the forefront of people’s minds then given that the first atomic bombs had only been dropped on Hiroshima and Nagasaki the year before.

And that’s about it. The rest is vague. We understand that the Centre was closed during World War II and used as the headquarters for a detachment of Fire Wardens but we have no details. At some point the local council took over the property but we don’t know when. At some point it stopped being the Boy’s Club and became the Coulsdon Youth and Social Centre, then the Coulsdon Community Centre. But information about the hows and the whys and the whens is almost non-existent. That font of local knowledge, the Bourne Society can add nothing at this time. The information above is courtesy of Tim Andrews at the Coulsdon History Facebook site who has been very helpful, but we need more. We still have more gap than filling. So, here’s where you can come in. Do you, or your mum and dad, or a friend, have memories of the Boy’s Club or the Youth and Social Centre? Do you know someone who was a Fire Warden during the War? Does anyone have photos of the fire engines that were stationed there or any other interesting photos of the building or events that took place there? Dances, dramas, displays, gigs, talks, wedding receptions, parties?

If you do, please let us share your memories and images. It’s the Centre’s 80th birthday in 2015, and it’d be great if we can properly celebrate all 80 years of serving Coulsdon. We’re interested in anything you may have, anecdotal or otherwise. All contributions that we use will be suitably acknowledged in print and on the website as we compile what we hope will be a defining history of this still beating ‘Heart’ of Coulsdon.

Please email me at coulsdoncom@yahoo.com, or write to the